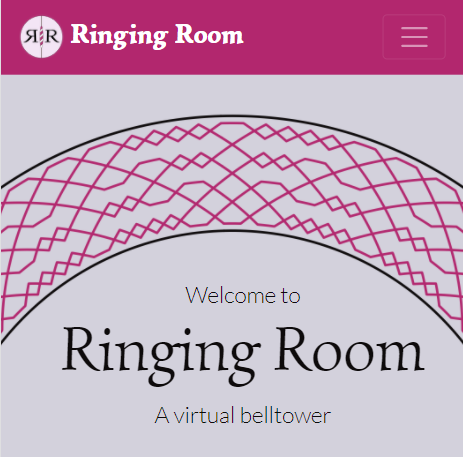 Running in Google Chrome
All who dare ... Enter here

In a galaxy far, far away ... Huddled in their homes, isolated due to the vast plague that covers the land. A historic few wandered out on to the Internet hills to hold the Oxford City Branch’s very first on-line ringing practice.

Seriously though - a total of 22 from our Branch joined (sorry no direct pictures yet, we haven't figured that one out yet) - to ring lots and lots and lots of Grandsire. The "Grand Grandsire Grand" had started.

Commencing with approximately 30 minutes of special help and instruction for those who have never rung a 'button in anger', four new faces attended - well done to all there. With plenty of helpers and advisors (especially Rachel and James) to guide the varying levels of tech awareness or non-awareness, it is not an easy thing - we all learnt a bit I'm sure. Special mentions must go to Charlotte, Deborah and Simon (with Susan) who basically tried things for the very first time, in unfamiliar settings, (with strange people!) & all did well, and got a bit further. Keep going.

Then the gathering of everyone at 10:30 - a vast sea of smiling (?) faces, ready to attempt this new historic venture. A bit of chaos ensued, as the new Ringing Master struggled to make the swift decisions needed to get the next stage & rooms set up. Loads of teething problems were expected and a few materialised. Yet again everyone was very patient, to the RM's great relief (thank you all). There was plenty of experience, and patience, to rely on. As many know, when ringing in Ringing Room a lot more patience is required, which of course makes the getting something round that much sweeter.

One of the advantages of on-line 'Ringing Room', is that you can pop in for 20 mins or so, and then step out, without too much bother. It is good that in the Branch we have at least four towers using the on-line (Ringing Room) facility. With St Aldates and Headington 'leading the way'. Closely followed by St Giles and Marston making a recent start. Next came the dividing into two rooms - a Grandsire doubles and a Grandsire Triples room. With approx 7 - 8 in the first and from 7 - 14 in the second. Special thanks go to Dorothy and Craig in triples & to Lindsay and Clare in the doubles rooms for sterling service in keeping things rolling. The aim was not to do too much 'higher' ringing, but to have solid rings increasing in confidence and fluency. So the same plain courses and touches were rung several times to increase those two areas. Also to improve the overall sense of understanding the structure of method. Not just being able to ring your bit, but grasp what is going on around you a touch more. Then after 45 mins, we regathered all in the same place to hear a few thoughts from the RM and to propose the next Branch Practice.

Finally, with much keenness the two rooms (doubles and triples) had another 30 mins or so, and reports say, many touches were gotten round with a few laughs on the way. They came to a natural end point, & most agreed it had been worth it. Two notes: a) Provisionally, with much agreement, another similar practice will be on Saturday April 10th, a week after Easter; and b) For those who don't regularly ring in ringing rooms - DO consider joining in with one of the weekly four towers that use Ringing Room. Which would be St Aldates, Headington, St Giles and Marston - do check with the organisers / facilitators of those sessions that it would be appropriate to join in. Two of those practices (Thursday & Friday) could be well suited to beginners. They'll be happy to have you. Even if its for 20 minutes or so.

I look forward to 'seeing' and hearing you all soon. Well done to all who joined in and made it a success. May there be more. But hopefully we'll get back to normal soon.

As the recently appointed Ringing Master, I thought it may be of help to start some regular articles for the Branch, letting you know what is going on. So ... in these strange times of Covid-19, unusual things can happen. The unusual thing this time is ... the Oxford City branch has elected a new Ringing Master. That would be me, Steve Everett, a member of St Andrew’s in Headington.

As Ringing Master, I'd like to promote four cultures to our ringing community. I think they already exist to some degree, but they could do with some polishing up perhaps. Apologies if there are some overlaps among these ideas.

A culture of Improving

Wherever we are at, both individually and as a group, the band is looking to push on and improve the ringing. Improving can mean many things and that is worth discussing. Personally, I'm keen to stress quality over quantity here. That whatever we ring, we ring it so that we have control and perhaps even mastery, especially in timing, striking and rhythm. Not only are we able to 'get it round', but also we are better aware of what else is going on around us; that is with the structure and the connections within even the simplest of methods.

A culture of Learning

Everyone in the branch should be aware of a) what level they are at now and b) what they are attempting next. Given appropriate time, mentoring, support and resources, this can be a relatively simple culture to set up, though perhaps a few new ideas are needed.

I'd also suggest that we need to think that there are many different ways of learning and that a combination of ways is also to be considered. Just saying "go away and learn St Clements for next week" might not be the most useful or encouraging way of going about things. There may be a variety and multiple things needing to happen, that we hope are all simple and not time consuming. Sometimes hearing the same thing, from a different 'voice', can make that breakthrough.

A culture of Supporting

Everyone in the Branch should feel supported in their ringing. Neither someone feeling stuck, with no-one or no action to turn to, nor too much fussing, complication or overload. No-one feeling 'help, how can I make progress?' or 'who can help me progress?’ I feel this shouldn't rely on just one person.

A culture of Having Fun

Everyone needs, at some time, to be having fun in their ringing. In my life, ringing is a good example of a positive welcoming community. I sense many of us feel the same. The group dynamic can be just as important as the ringing produced. Especially in the idea of 'having fun', I'm thinking of the 'thrill' (fun?) of standing after a well struck touch that everyone has participated in, and we all look at each other and say ‘that was good!’

So ... well done for getting this far

I hope me mentioning these four cultures rekindles or starts some fresh impetus as a Branch. Thank you for taking the time to read this - feel free to give feedback via my email address.